Scorrybreac, the historic homeland of this highland clan is on the romantic Isle of Skye and in 1987 the world membership bought these lands at Ben Chracaig, near Portree as a focal and spiritual HQ with the purpose of preservation and giving public access. This wildly beautiful spit of land juts out into the Sound between Skye and Raasay just above Portree where clansmen feel a strong sense of homecoming when following the trails up Ben Chracraig with its panoramic views over Portree Bay to the famous Cuillin Hills. For the less adventurous there are splendid and extensive shoreline walks.
At Scorrybreac you will find the worldwide clan memorials with flags, and when held in Scotland, this land is central to the International Gathering, as are the many other historical sites on the island pertaining to the greater Clan MacNeacail family. This opportunity of kinship, exchange of geneology and information is held bi-annually on a rotating basis between the various countries, Scotland, North America, and Australasia.

Scorrybreac was the stronghold of the highland Clan Nicolson (Macneacail) for over 800 years. The last Chief left the island in 1825 and immigrated to Campbelltown, Tasmania where the original house is still named Scorrybreac. The current Chief, John Nicolson, lives in Ballina, New South Wales, Australia and together with his family makes frequent visits to Scotland.

The area of Scorrybreac known as Ben Chracaig overlooking the village of Portree was sold to a property developer in the 1980s with the intention of establishing an outdoor activity centre but this caused a public outcry from the local community who saw it as an important amenity.
With the help and vision of retired Skye exile Ian Ferguson Nicolson, who had returned following a career in Australia to reside on the Isle of Man, the suggestion was made for the clan to purchase the ancient clan lands at Scorrybreac. With the help of Murray Nicolson from Boston USA and Rosemary Nicolson from Australia, and with an interest free loan of £25,000 put up by Skye business man Calum (Caley) Nicolson, in 1987 the lands were back in the hands of the highland Nicolsons. The land is now administered by a Trust (Urras Clann Mhicneacail) who’s members are drawn from around the world.
The objectives of the trust is to ensure that the lands will be held in perpetuity for free public access, conservation, and public enjoyment.

More information can be found at www.clanmacnicol.org 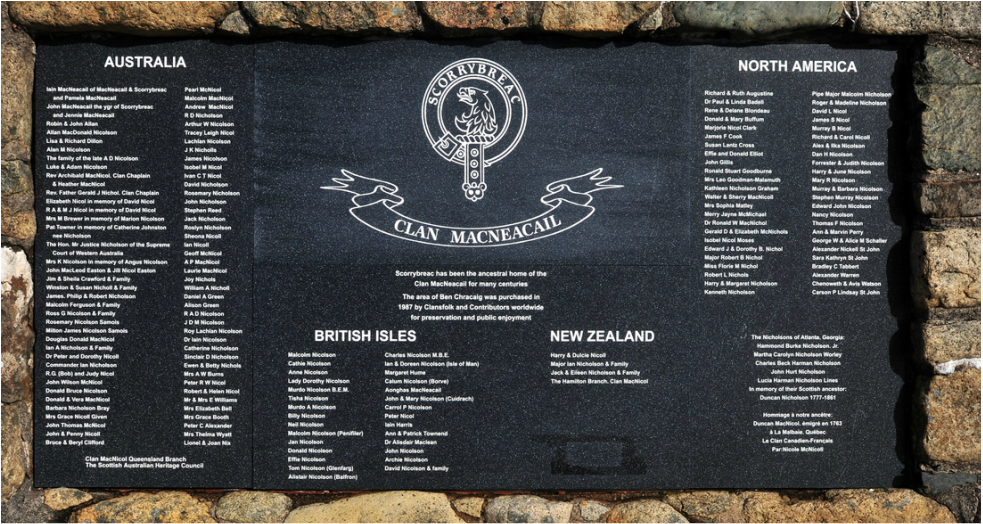